What Gluten Intolerance Means for Your Thyroid 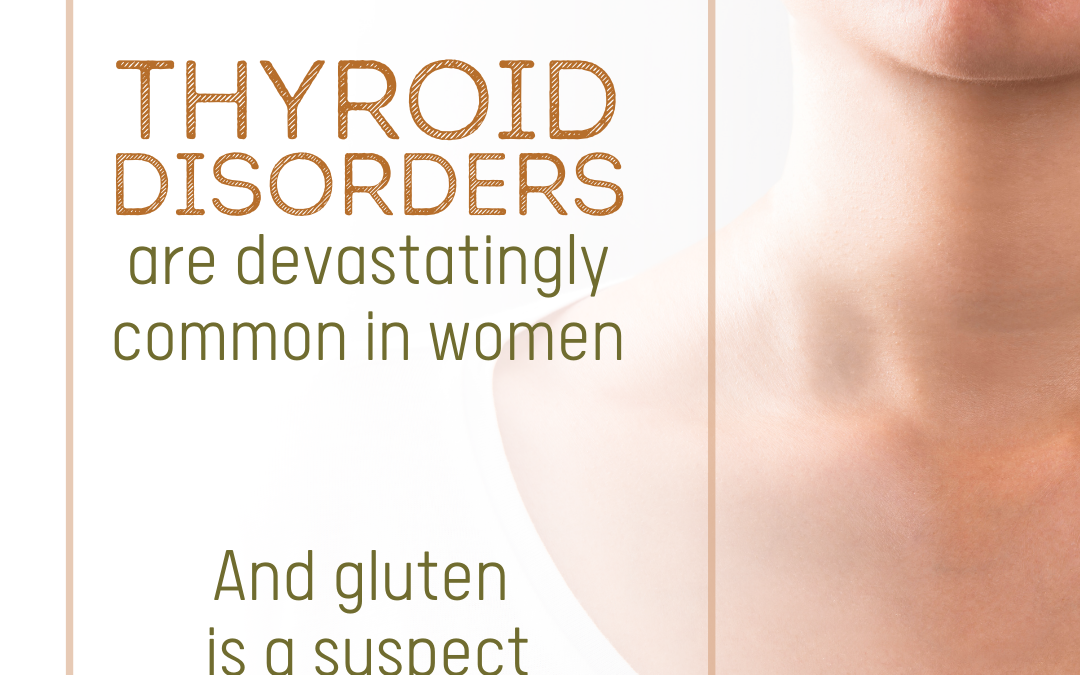 By now, you’ve likely heard about gluten intolerance. The buzz word “gluten-free” is everywhere in the health world. But how impactful is gluten? For those with thyroid issues, it may be affecting you more than you realize.

About 20 million Americans are currently suffering from a form of thyroid disease. And roughly 60% don’t know it. Thyroid disorders are particularly common in women with one in eight females going on to develop a thyroid condition within her lifespan, and women are five to eight times more likely to have thyroid issues than men.

Your Thyroid Can Be Under or Over Performing

A malfunctioning thyroid can lead to either over or under-production of thyroid hormones. These hormones — called T3 and T4 — affect every organ system in your body.

Whether the issue is hyperthyroidism, hypothyroidism, Grave’s disease, or Hashimoto’s thyroiditis, the symptoms of thyroid issues can vary in severity from moderate to life-changing. That’s why Functional Health practitioners take a holistic approach to tackle thyroid issues from all angles – and that includes nutrition.

If you have an auto-immune thyroid issue, eliminating gluten entirely is critical to fully understanding your condition. Even eating small amounts can cause immune reactions lasting up to six months, so complete elimination is needed in order to notice any difference in your symptoms.

Gluten-free diets can be tricky to maintain, but the results are worth the trouble. Your gluten intake may be the critical factor affecting the function (or auto-destruction) of your thyroid.

How Does Gluten Lead to Autoimmunity?

When you ignore food sensitivities, your gut often pays the price in inflammation. Over time, inflammatory foods (like gluten) can degrade the delicate lining of your small intestine, leading to permeability or “leaky gut”. When this happens, food particles are able to slip past the protective mucosal layer, between the cells lining the intestinal wall, and reach your bloodstream. The protein portion of gluten — called gliadin — is a common culprit.

The immune system targets these proteins as foreign particles and begins to attack them. Unfortunately, gliadin protein molecules are strikingly similar to the molecules that make up the thyroid gland. Once antibodies to gliadin are created, they can mistakenly attack thyroid tissue. From that point on, you have an auto-immune response to gluten.

A Gluten Intolerance Can Be Hidden

Many people misinterpret gluten intolerance as a “digestive” issue only. But it can affect far more than just the digestive system. Antibodies triggered by this kind of gluten intolerance travel throughout the whole body: the joints, skin, respiratory tract and brain can all be affected. In fact, for some people affected, no digestive symptoms are seen at all. With a wide variety of possible symptoms, gluten sensitivity may take a lot of effort to uncover.

Other Grains Can Mimic Gluten

As if the situation wasn’t complex enough, once the antibodies for gluten have been created, they can mistakenly attack other proteins too. Certain grains, such as corn, oats and rice, are naturally gluten-free yet their proteins are so similar to gluten that they occasionally still elicit an immune response. A Functional Health practitioner can help you identify which foods may trigger your gluten sensitivity.

Casein Sensitivity May Also be an Issue

Lactose intolerance is much more common than gluten intolerance. However, the two often overlap. In one study in Italy, roughly 25% of people with lactose intolerance also had celiac disease, a digestive condition that is linked to gluten-related autoimmunity.

This means that for many people, going gluten-free won’t be enough to get to the root of their auto-immune symptoms. If intolerance to casein (the main protein in dairy) may be at play, patients are often advised to adopt both a dairy-free and gluten-free diet during the elimination phase, with dairy being added back separately to assess casein sensitivity.

How We Test for Gluten Intolerance

There are multiple ways to test for food sensitivities and ascertain whether gluten intolerance may be playing a part in your thyroid issues.

Testing for Antibodies in the Blood

Running a food sensitivity panel is one way to start learning what is going on. Although they are expensive to run, and do not always lead to a clear path of action other than the complete avoidance of the foods in question, these blood tests can be vital guideposts in the dark for tricky cases.

Your Functional Health practitioner may advise running a food sensitivity panel before you begin an elimination diet so that you have a benchmark to work with. While eliminating gluten and dairy are the most common requests, you may be asked to remove one or more other foods based on the results of your food sensitivity panel so that other potential problem foods don’t interfere with the success of your elimination phase.

Hypo-allergenic diets may be the most powerful tool a Functional Health practitioner can recommend, but no bones about it: these diets can be very difficult and take a long time. The hidden benefit is that the diet you are on during the investigation eliminates your possible triggers, so you should start to feel better right away, even as you uncover the details of your sensitivity.

Luckily, when it comes to auto-immune conditions, removing dairy and gluten are often the main dietary requirements and there are many alternative foods available.

For anywhere from two to six weeks, depending on your individual situation, you’ll remove all dairy and gluten from your diet. During this time, you’ll keep a close eye on your symptoms to see if they resolve or reduce dramatically. If symptoms don’t resolve, you may be asked to remove additional foods: like eggs or soy.

Once your symptoms resolve, you’ll reintroduce each food one at a time. Let’s say dairy first. You’ll have dairy in every meal for three or four days while keeping note of any symptoms or sensitivity reactions. Then you’ll be instructed to stop eating dairy for three days.

If there are no reactions during elimination or in the final phase, a dairy sensitivity can be ruled out. At that point, you can safely add dairy back into your diet.

Next, you will begin the challenge phase for gluten. Let’s say you did have a symptom response to gluten. At that point, you would be instructed to eliminate gluten from your diet for another three to six months before attempting the challenge again. After a longer break, some food sensitivities are no longer as offensive.

If – on the other hand – your symptoms did return when you reintroduced gluten, your Functional Health practitioner may diagnose you with gluten intolerance.

The health of your thyroid affects every cell in your body. If you suspect an autoimmune condition may be affecting how well you feel, please give us a call. As a Functional Health practitioner I have access to a wide array of investigative tools and lab tests to help you uncover what’s really going on – and come up with a tailored plan to help you feel like yourself again